I’ve always been an early riser. Not a 6AM early riser, or even a 5:30AM early riser — I’m a 4AM kind of girl. Maybe I’m a masochist, but really I just have a love affair with early mornings; each is reminiscent of my favorite Robert Frost poem, Nothing Gold Can Stay. I’m in love with the crispness of the air, the faint rustle of leaves as they eagerly await their brief chance to be golden with the rise of the sun. I feel peace on the empty roads and abandoned beaches, as the vestiges of natural landscape glimmer with whispering critters, most of which I long to cuddle and have as pets. I’m in love with early mornings because they’re not insistent; they don’t demand that I accomplish tasks, solve problems or make plans. Early mornings don’t expect me to look presentable, speak logically or even act accordingly. Early mornings allow me to just be. I’m in love with early mornings because they bring me as close as I’ll ever be to experiencing the world before life was so…busy, so crowded, so hurried and so complicated.

Early mornings offer me the opportunity to witness what I would otherwise overlook in the post-morning bustle. Like this morning; I saw a flickering street light — not the usual flicker of a bulb making its final stand before eternally burning out. This was a flickering that appeared as a deliberate, even strategic, dimming and brightening. As I drove by, I glanced in my rearview mirror, only to see it resume its ordinary glow alongside its streetlight companions. To anybody else this might have  been something explained away by the nuances of modern electricity. To me, however, it was a wink, a wave…a nod from beyond.

I’ll be the first to tell you I’m a skeptic when it comes to just about everything. I have a hard time believing in anything I can’t see, anything that hasn’t met my burden of proof, and anything that isn’t justifiably explained in a textbook from a highly verifiable source. With that being said…I see Hawks. Red-tailed Hawks, Cooper’s Hawks, seahawks, Red-shouldered Hawks. Hawks. Everywhere. Hawks on lampposts, Hawks adorning trees, Hawks circling overhead, and Hawks seeming to barrel  directly at me. This is a daily occurrence. The skeptic in me sometimes wonders if I just have a keen eye for spotting them, habituated by years of my dad’s conditioning. Other times, the Hawks are undeniably there for me. A Hawk will screech and swoop ceaselessly until I acknowledge it, speak to it — then it will appear to vanish. And just like the flickering streetlight, I know it’s my dad. I just know it. 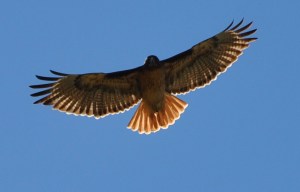 Admittedly, instead of being comforted by these visits, I mostly feel frustrated and anxious; “I SEE YOU! I HEAR YOU! WHAT ARE YOU TRYING TO TELL ME?!”
Recently, after again being accosted by a Hawk, I told my frustrations to my friend, Elyse. Without hesitation she said “maybe your dad is just trying to let you know he’s with you.”
Aha. How could something so simple (and seemingly, so obvious) have escaped me?
I had been so fearful and worried that he’s been here to warn me, it had never crossed my anxiety-ridden, skeptical mind that, of course, he’s here to love and comfort me, he’s here to watch over me, he’s here to swoop, screech, flicker, glow and to light my path. Most importantly, my dad is “here”, so simply and so beautifully, to remind me that he’s here.
And even when the Hawk flies away, the flickering streetlight returns to uninterrupted illumination, and morning gives way to day — my dad will still be here. And though Nothing Gold Can Stay, I know now that my dad’s love and presence will forever remain.

Nature’s first green is gold,
Her hardest hue to hold.
Her early leaf’s a flower;
But only so an hour.
Then leaf subsides to leaf.
So Eden sank to grief,
So dawn goes down to day.
Nothing gold can stay.